Davies named Coach of the Year 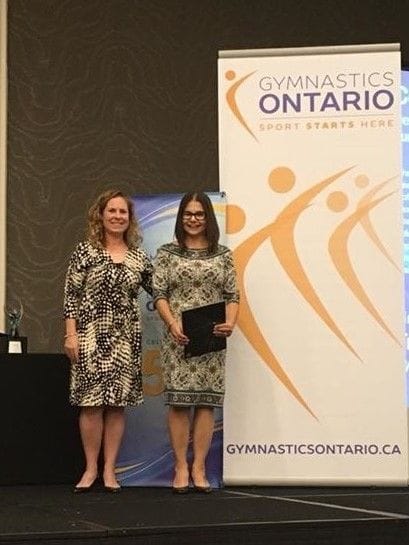 Winstars Tracy Davies chosen as "Coach of the Year"

Winstars Tracy Davies, a veteran coach of almost 20 years, is Gymnastics Ontario's "Coach of the Year".

Davies, a former artistic and tumbling athlete herself, was presented by her good friend, Heather Smiley, with this honour on the weekend at the Gymnastics Ontario annual awards banquet. Tracy has worked for Winstars since it opened in 2000. For years, Tracy worked as a fitness instructor and desk staff in our fitness centre in our last two locations.

Since moving to Central Park Athletics in 2013, she has worked as a coach in the Tumbling program. In addition, Tracy works in the office as our competitive program administrator. Tracy has coached many athletes over the years and has had several provincial and national champions.

Most recently, Tracy (and fellow coach Rob), have coached Alexandra Jubenville for some time. Jubenville will be attending the World Age Group Trampoline & Tumbling Championships in Sofia, Bulgaria in November. Alex has competed at two previous international competitions last year in Portugal and New Zealand.

Winstars is very fortunate to have Tracy on our staff. We congratulate her for the years of coaching service to these young athletes. This "Coach of the Year" award is very well deserved.